Complete the form below to receive the latest headlines and analysts' recommendations for Lamar Advertising with our free daily email newsletter:

BidaskClub cut shares of Lamar Advertising (NASDAQ:LAMR) from a hold rating to a sell rating in a research report released on Saturday morning, BidAskClub reports.

Lamar Advertising (NASDAQ:LAMR) last announced its quarterly earnings data on Thursday, May 7th. The real estate investment trust reported $0.40 EPS for the quarter, beating the Zacks’ consensus estimate of $0.36 by $0.04. Lamar Advertising had a net margin of 20.35% and a return on equity of 31.25%. The company had revenue of $406.57 million for the quarter, compared to the consensus estimate of $396.04 million. During the same period in the prior year, the firm posted $0.51 EPS. The company’s quarterly revenue was up 5.8% compared to the same quarter last year. As a group, equities research analysts expect that Lamar Advertising will post 4.71 EPS for the current year.

The firm also recently declared a quarterly dividend, which was paid on Tuesday, June 30th. Investors of record on Monday, June 22nd were paid a dividend of $0.50 per share. This represents a $2.00 dividend on an annualized basis and a yield of 3.01%. The ex-dividend date was Friday, June 19th. Lamar Advertising’s dividend payout ratio is currently 34.48%.

In other Lamar Advertising news, Director John E. Koerner III purchased 17,000 shares of the firm’s stock in a transaction that occurred on Friday, May 15th. The stock was purchased at an average price of $66.32 per share, for a total transaction of $1,127,440.00. 15.02% of the stock is owned by corporate insiders.

Founded in 1902, Lamar Advertising (Nasdaq: LAMR) is one of the largest outdoor advertising companies in North America, with approximately 360,000 displays across the United States and Canada. Lamar offers advertisers a variety of billboard, interstate logo, transit and airport advertising formats, helping both local businesses and national brands reach broad audiences every day.

Featured Article: What does an outperform rating mean? 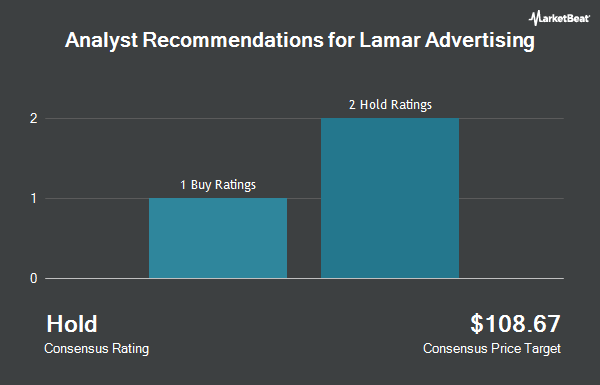