Complete the form below to receive the latest headlines and analysts' recommendations for Customers Bancorp with our free daily email newsletter:

Equities research analysts expect that Customers Bancorp Inc (NYSE:CUBI) will report $103.31 million in sales for the current quarter, according to Zacks. Two analysts have provided estimates for Customers Bancorp’s earnings. The lowest sales estimate is $102.74 million and the highest is $103.87 million. Customers Bancorp reported sales of $79.02 million in the same quarter last year, which would suggest a positive year over year growth rate of 30.7%. The business is scheduled to issue its next earnings results on Wednesday, April 22nd.

On average, analysts expect that Customers Bancorp will report full-year sales of $428.42 million for the current fiscal year, with estimates ranging from $427.84 million to $429.00 million. For the next financial year, analysts anticipate that the firm will report sales of $453.33 million, with estimates ranging from $451.00 million to $455.66 million. Zacks Investment Research’s sales averages are a mean average based on a survey of sell-side research analysts that cover Customers Bancorp.

Customers Bancorp (NYSE:CUBI) last announced its earnings results on Wednesday, January 22nd. The bank reported $0.76 earnings per share (EPS) for the quarter, missing the consensus estimate of $0.77 by ($0.01). Customers Bancorp had a return on equity of 10.53% and a net margin of 14.56%. The firm had revenue of $103.41 million during the quarter, compared to the consensus estimate of $93.76 million.

Further Reading: How Investors Can Profit from Options Trading 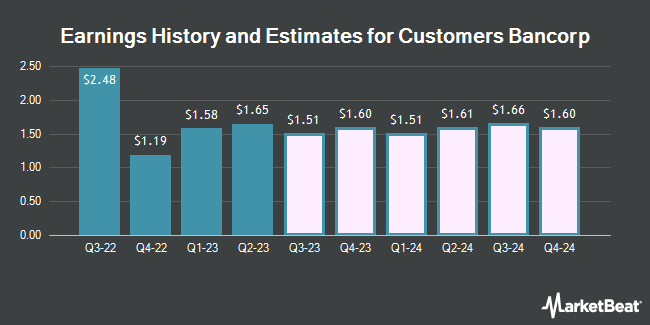